Everyone seems to be searching for a short guide to a long life. After doing some research, I found that a long life seems to be the result of a short list of healthy habits. In 1930, a professor of the Chengdu University discovered Chinese government records from 1827 congratulating Li Ching-Yuen on his 150th birthday, and further documents later congratulating him on his 200th birthday in 1877. 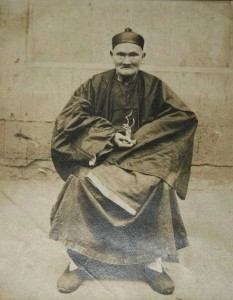 Li Ching Yuen began his journey as an herbalist at the age of 10. He gathered herbs in mountain ranges of rural China and learned of their benefits toward longevity. For almost 40 years, he survived on a diet of herbs alone. Herbs such as lingzhi, goji berry, wild ginseng, he shoo wu and gotu kola, and rice wine. In 1749, at age 71, he joined the Chinese armies as teacher of martial arts. Li was said to be a much-loved figure in his community. He married 23 times and fathered more than 200 children. Li was able to read and write as a child, and by age ten had traveled in Kansu, Shansi, Tibet, Annam, Siam, and Manchuria to gather herbs. For the first hundred years of his life, he continued at this occupation as an herbalist. He then switched to re-selling herbs gathered by others. He sold lingzhi, goji berry, wild ginseng, he shou wu, and gotu kola along with other Chinese herbs, maintaining his diet of solely herbs and rice wine. Other in his village claim to have encountered an even older – 500-year-old man. He taught Qigong exercises and dietary recommendations that would help extend the lifespan to monumental proportions.

On his death bed, Li said, “I have done all that I have to do in this world” as if he’d perfectly calculated the timing of his death. To some degree it seems that he was one with the infinite intelligence that permeates and penetrates all time and space. Those final words held the biggest secret to Li’s long and fulfilling life. In the Western world, we’re made to believe that aging is some sort of curse and our prime is less than 10% of the length of Li’s life. Could you imagine if he spent the remaining 90% of his life thinking he was past his prime? People always tell me that y 20s are my golden years, but frankly I feel quite lost and confused. I’d hate to think of spending my “golden” years trying a bunch of different things I end up quitting and traveling to a bunch of places without anything substantial that impacts the lives of others. It’s mind boggling that this man could survive on herbs and a simplistic lifestyle while most Americans seem to be shoving prescriptions down their throats & treating stress/depression with alcohol and other low vibrational substances – hoping it somehow let’s them live a long and joyful life.
When Li was asked what his secret was to longevity, he said “Keep a quiet heart, sit like a tortoise, walk sprightly like a pigeon, and sleep like a dog.” He maintained an inner calmness and peace of mind compounded with breathing exercises, and a lean, high vibrational diet. It’s crazy that the oldest living person in recorded history attributed his life to his state of mind. As technologically advanced and forward thinking the United states is, it’s a shame our life expectancy is only 70-85 years. The idea of someone living over 200 years seems unimaginable. I don’t want to get into conspiracies, that’s an entirely different matter, but it almost seems suspicious that we’re offering so many people free “healthcare” and “food stamps” yet our average life expectancy isn’t even in the top 40 countries in the world.

Maybe the forced 9-5 lifestyle, stresses of debt and taxes, difficulty to acquire food/materials by gathering, polluted air, chemically altered water, GMO food, manipulation through marketing, government propaganda, celebrity culture influencing the masses, and lack of focus on exercise in our culture have something to do with it. The rural Chinese don’t eat refined sugars or flour, or any foods that have been sprayed with pesticides that’s for sure. They aren’t eating fast food, if that even counts as food, and don’t know about all the bad in the world because they aren’t watching it on the news and reading it on the internet all the time. These people don’t eat fatty meats, a very small amount of fish, definitely don’t eat sugary deserts, and of any genetically modified foods whatsoever. There are no antibiotics used on the plants or animals, alcohol or tobacco use. Their diets not only exclude junk food and candy, they compensate by including superfoods and herbs which super power our organs and immune system. I wouldn’t even know how to get half of the things they eat regularly.

Li spent his spare time in nature keeping his mind sharp, practicing breathing techniques, and meditating which are known to improve mental, physical, and emotional health. By keeping things simple, getting proper sleep, and spending a great deal of time in nature under the sun – at peace with oneself, he was able to live an epic life. Relaxing in the sun instantly rejuvenates us so why not do it more often? It feels so great to be on vacation, even if you’re staying with a host family in a hut. A lifetime in the mountains with so much fresh unadulterated oxygen, balanced with perfect mental, spiritual, and physical well-being sounds like something out of a fairytale. The Western lifestyle has its benefits, especially for entrepreneurs and capitalists. I just wish people knew there were other ways to do this thing we call, life.