I wanted to share my story and I have a message, a message to the black man…Being married to a black man is like mountain climbing. Absolutely breathtakingly beautiful. Everytime you reach a peak, you realize how many more you have to climb. Everytime you stop to take in the view, you start losing your footing. You hope to bring someone else to the top of the mountain with you one day, but then you remember how hard your journey was. And you try to live every moment like it’s your last because you both know how inherently dangerous mountain climbing is.

I got married to my high school sweetheart in St.Louis, MO back in 2014 – on the same weekend Michael Brown was killed. While on our honeymoon, we couldn’t help being distracted by the international coverage of the rioting in our hometown. And here we are in 2016, dealing with more unarmed black men being killed around the country – but this time, it hit me differently, even closer to home. 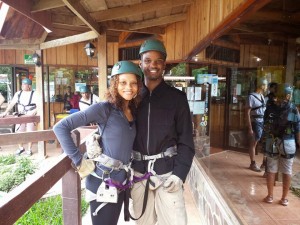 In light of recent events I wanted to share what it’s like being married to a black man. To add some humanity to these “thugs” you see blasted across the news. To share why #BlackLivesMatter. And hopefully the next time you clinch your purse tight, follow someone around a store, pass on waiting for a black family’s table, or cross the street to avoid a “sketchy” black man, you’ll remember reading this.

A message to the black man… you are loved, you are important, and your journey inspires a strength for which there are no words.

2 thoughts on “Being Married to A Black Man”